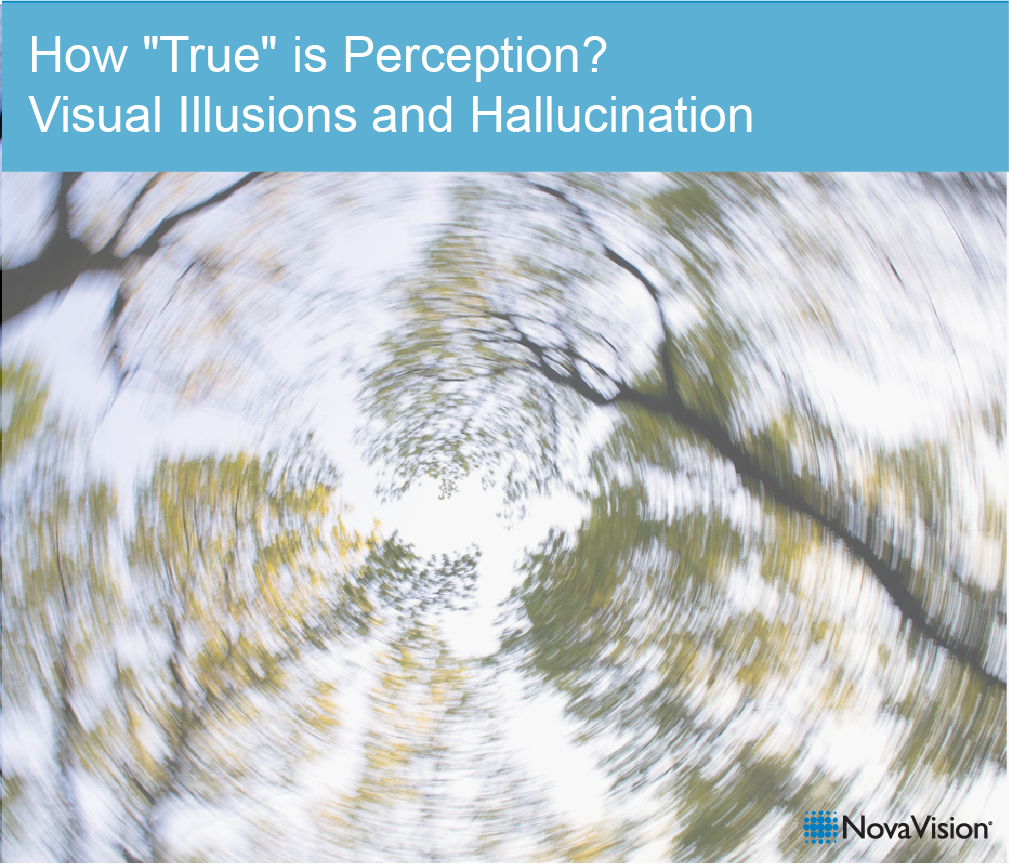 How “true” is perception? Visual illusions and hallucination

Our previous blog The Eyes – Our Window To The World discussed the structure of our eye and how it works. In this blog, we discuss how the brain, in processing the information the eye is seeing, sometimes “fools” us into perceiving things differently to reality. This is very normal in everyday life but can also manifest itself after a stroke or brain injury – and might actually be a sign of recovery!

Throughout the day we process a vast amount of information through our five senses: sight, hearing, smell, taste and touch. There are more than 100 million photoreceptor cells in each eye and although our brain processes data very quickly it uses some tricks reduce the amount of data that it has to process. As a result, what you seem to see may be different from what is actually there…

How “true” is perception?
Our brain reduces the amount of data processing based on our previous experiences and knowledge.

The brain typically relies on the most probable or most familiar interpretation of facts to process data based on this knowledge and also uses factors like incidence of light and shadows in processing information.

In our eyes, the three-dimensional world is mapped onto the two-dimensional retina. In many cases it is therefore purely mathematically impossible to calculate the “true” spatial world. Our visual system has to choose between an infinite number of possible interpretations. Many optical illusions work by providing the brain too few or ambiguous interpretation notes of what is seen.

We know from experience that things that are further back are visually smaller. The three cylinders on the image are the identical size, but by the perspective lines it looks as if the right cylinder is larger than the left.

In the example above, each block of horizontal lines seem to be wedge-shaped, going from wide to narrower or narrower to wider. In reality, all the horizontal lines are exactly parallel. This illusion is a result of shifting brightness contrasts. The black and white rows are separated by narrow grey lines, which are perceived to be a lot brighter between the black fields and darker between the lighter fields. The black and white boxes are not aligned vertically, and so perception now connects the “brighter” grey line segments with the corners of the white boxes, and the “darker” grey line segments with the corners of the black boxes. These “subjective contours” are perceived as being slanted towards the horizontal and let the rectangles appear to be wedge-shaped.

The perception of brightness differences is very subjective. A colour that we perceive as light at dusk appears to be dark in sunlight, and vice versa. Physically, this interpretation is correct.

Which of the two squares is brighter, A or B?

Squares A and B are the same shade of grey, yet appear to have different brightness because B is seen as being in shadow. Drawing a connecting bar between the two squares breaks the illusion and shows that they are the same shade.

Motion illusion occurs when a static image appears to be moving. When repeated patterns with varying degrees of contrast or colour are put together, the retina and the brain processes these at different speeds – particularly in the periphery. As a result, static images appear to be moving; this is similar to the way in which a star in the dark sky appears to move.

Visual hallucinations after damage to the visual system

Following a stroke or other brain injury, not only can people experience visual disorders or loss of visual field, but they can also experience hallucinations and other visual perception anomalies. A person can “see” colours, objects or movements that are different from reality.

Perception in the damaged area of the visual field can take longer to process than in the undamaged area. This may result in a delay and so an object or person may be “seen” in the damaged area later than they were actually there. Spatial perception is also affected, so a person walking into view may be perceived to be in a different place and also seen later – resulting in the person believing they have seen someone who is not actually there.

Hallucinations also occur as a result of people suffering severe vision loss, not just from brain or optic nerve damage but also other causes such as retinal disease. This is known as Charles Bonnet syndrome. These hallucinations can be very vivid and realistic, and can last for 12-18 months after a loss of vision although in most cases they recede quite quickly.

A scientific study into hallucinations following a stroke[1] concluded that these may actually be associated with recovery of visual functions, and may be the functional indicators of visual plasticity, and therefore should be considered a positive phenomenon. Patients in the study experienced hallucinations during a period of natural recovery of visual field loss post stroke, and these hallucinations re-appeared during periods of clinical recovery using NovaVision’s  Visual Restoration Therapy.Hallucinations were experienced during the most intense periods of visual field recovery and particularly for those patients experiencing the greatest shift in the visual field border. The study concluded: “hallucinations may be the hallmarks of the self-healing processes of the visual system: a functional expression of changes in the…visual cortex that precede or parallel the return of lost visual functions”.