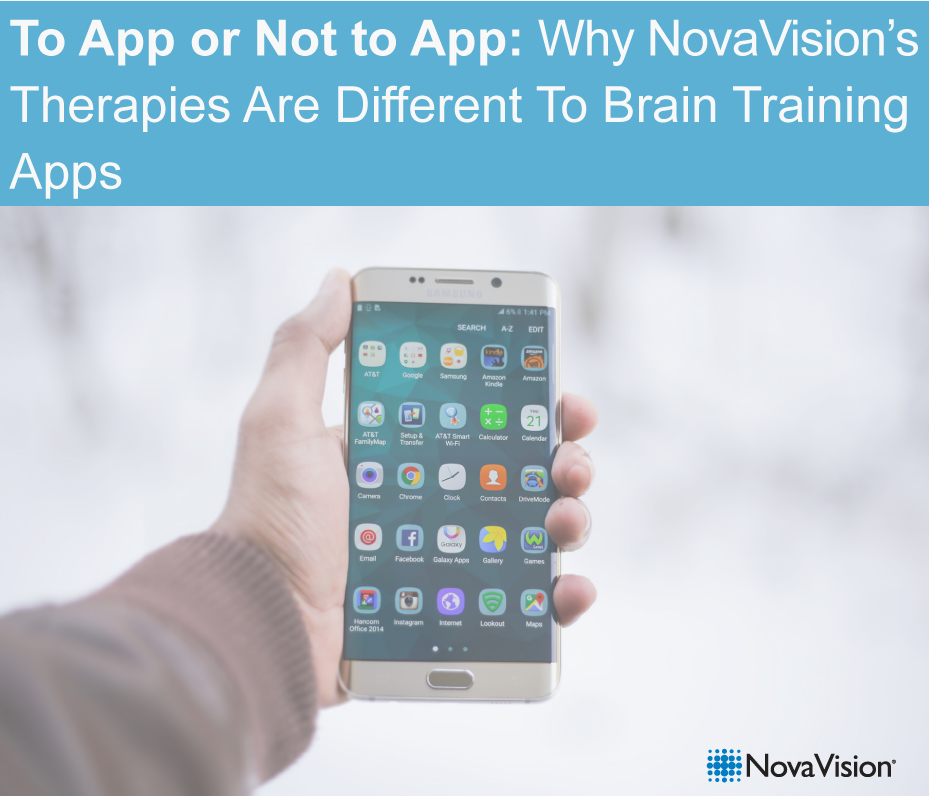 To App Or Not To App: Why NovaVision’s Therapies Are Different To Brain Training Apps

At NovaVision we are sometimes asked the question: “what is the difference between your therapies and a brain training app I can download for less money?”

The question here really goes to the heart of whether the process the brain goes through to regain function such as lost vision – otherwise called neuroplasticity – can be guided and aided by non-specific interventions; or whether an evidence-based tailored approach to the specific problem is needed to ensure maximum benefit.

Pascual-Leone M.D., Ph.D., is Professor of Neurology and an Associate Dean for Clinical and Translational Research at Harvard Medical School and also serves as the Director of the Berenson-Allen Center for Non-invasive Brain Stimulation at Beth Israel Deaconess Medical Center.  Dr. Pascual-Leone, a practicing behavioral neurologist, believes that “thanks to a recent explosion of research into neuroplasticity, the pendulum has swung towards hopes that brain therapies will become a cure all.” However, Dr. Pascual-Leone stresses the importance that intervention must be guided:  “Researchers delving into brain based healing are discovering that changes that benefit one person may be detrimental to another. For that reason neuroplasticity treatments must be backed by science, prescribed to fit each patient and monitored, which goes against the plethora of non-prescription brain training type Apps promising benefits to all.”

NovaVision’s therapies such as Vision Restoration Therapy (VRT) and NeuroEyeCoach are not Apps but are registered medical devices based on decades of scientific findings, and are tailored to patients with vision loss resulting from neurological brain damage such as stroke. They are not general vision therapies and should not be used as such; they are tailor-made to each patient’s blindness, the therapy course is supervised and they are validated through extensive clinical data.

VRT leverages the fact that when the brain is damaged so is the network of neurons that process vision. Some networks in the brain are duplicated and the systematic stimulation of the damaged area with light stimuli at specific locations enables the activation and usage of alternate routes to process the visual information. Although the exact mechanism of this positive neuroplasticity is not fully understood what is evident is that if performed with patients who have a visual field deficit then in approximately 70% of cases there is a benefit in the form of an increased visual field and a related improvement in daily activities.

The use of visual search in improving the scanning and search efficiency of hemianopic patients was first reported in 1988. Other than its use in various forms in a limited number of rehabilitation clinics over the past 25 years, there has been a marked lack of an evidence based vision specific medical device broadly accessible to patients despite there being a large body of evidence, including randomized control trials that have shown that patients benefit from systematic eye movement training.

NeuroEyeCoach was developed based on the findings of 13 studies with a total of 551 patients, including randomized control trials, showing that patients benefit from systematic eye movement training. A recent important study published in BioMed Research International concluded “NeuroEyeCoach can be used as an effective rehabilitation tool to develop compensatory strategies in patients with visual field deficits after brain injury” and that NeuroEyeCoach can be viewed as being the first evidence-based, vision-specific, clinical gold standard registered medical device accessible to patients at home or in clinical settings.

Like VRT, NeuroEyeCoach is not an off-the-shelf App. The program is set up to match the patient’s visual and scanning capabilities, and then adjusts speed and levels of difficulty based on the patient’s progress. Reports are also provided after each stage.

NovaVision, and its Scientific Advisory Board strongly believes that specific, guided therapy is required to address specific issues; and so developed its therapies tailored to address vision loss from neurological damage. This view was supported by a study conducted a few years published in Nature, a highly regarded clinical journal, called “Putting brain training to the test”. This high quality study stated: “Brain Training, or the goal of improved cognitive function through regular use of computerised test, has grown to be a multimillion pound industry, yet in our view scientific evidence to support its efficacy is lacking…the widely held belief that commercially available computerized brain-training programs improve general cognitive function in the wider population in our opinion lacks empirical support”. The central question explored was whether the benefits experienced by performing App-training designed to address reasoning, memory, planning and attention could also lead to general improvements of cognitive functioning. This six-week, 11,430 patient study found no evidence of benefits to general cognitive function or improvement in untrained tasks, even where those tasks were cognitively closely related.

The scientific evidence to date is that the brain does indeed respond to specific interventions that are supervised and evidence based. Specific therapies for both motor and visual impairments have been developed leading to significant recovery.  Conversely, available clinical data does not generally support the claims made by Apps that promise to offer broad benefits to patients. Patients seeking specific benefits should seek therapies that are evidence-based, specifically designed and proven, tailored to address the issue at hand and are registered as medical devices.

To learn more about our therapy suite please visit our page here.